“With thousands of miles to drive and countless hours of playtime thanks to all of the new possibilities that Italia offers, this is, in my opinion, the best DLC that SCS Software has released yet for Euro Truck Simulator 2.”
9.5/10 – Scholarly Gamers

“With the Italia DLC, SCS Software have impressed with their attention to detail and ability to craft an immersive environment yet again. A combination of new destinations, famous landmarks, regional industries, and additions to the fleet of trucks will keep fans of the series coming back for more as Euro Truck Simulator delivers yet again.”
9/10 – Gaming Respawn

“Precarious mountain paths, relaxing coastal routes, busy roads through ancient cities — Italy’s got a lot going for it. Looking outside at the rain and the perpetually grey skies, I’d love a trip down to the Mediterranean right about now.”
N/A – Rock, Paper, Shotgun

Experience the typical features of Italy from behind the wheel. Explore roads leading through the Apennines, where tunnels and bridges alternate with scenic vistas and curvy segments, opening the view to distant horizons. Descend from the height of mountain passes to the shores of the seas, travel from manicured farmland to wilder and more arid places.

The geography and shape of Italy have led to a comparatively high concentration of cities in the Italia map expansion. Local industries contain, among others, famous places like Carrara marble quarries and Europe‘s largest Steelworks in Taranto.

Cities included in the expansion 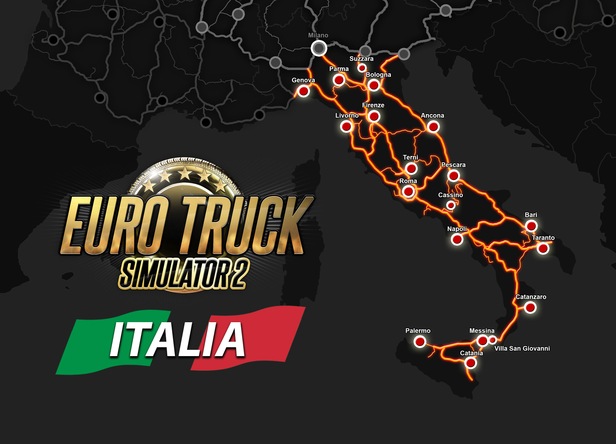 (C) 2017 SCS Software. All brand names, trademarks, registered marks, logos, and symbols on vehicles in the game are property of their rightful owners. Used with kind permission.